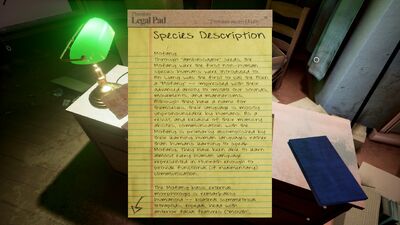 Species Description is a Document in Obduction.

This document is found in Farley's Community Center. It describes the three alien species that the Humans encounter.

Through "ambassador" seeds, the Mofang were the first non-human species humans were introduced to. An Liang was the first to call the Alien a "Mofang" -- impressed with their advanced ability to imitate our sounds, movements, and mannerisms. Although they have a name for themselves, their language is mostly unpronounceable by humans. As a result, and because of their mimicry abilities, communication with the Mofang is primarily accomplished by their learning human languages rather than humans learning to speak Mofang. They have been able to learn almost every human language represented in Hunrath enough to provide functional (if rudimentary) communication.

The Mofang basic external morphology is remarkably humanoid -- bilateral symmetrical tetrapods, bipedal, head with anterior facial features ("mouth", eyes, nostrils). Other external features include minimal body hair and raised dorsal protrusions. Constitution is somewhat frail, due apparently to their thin and lightweight internal structure, but internal investigation has not been possible. They have ample cranial space to account for a substantial brain, and their intelligence is impressive as evidenced by their advanced technology.

After a certain level of maturity and health of The Tree, a passage opened at its base. This passage allowed contact with two additional species. The first contact was with the Arai. The first contact revealed the Arai to be large beetle-like insects. We were unable to communicate directly with them in any way, but they appeared to have some rudimentary level of intelligence. It was Lőrinc Tòth who first made the journey through the heart to Kaptar, and named both the new world and the inhabitants.

The Arai have three distinct variants that have come to be referred to as barnacle, beetle, and polyarch. Although their morphology is dramatically different from human, their internal systems (like all of our neighbors) are supported by similar atmospheric composition and basic nutrients.

In their barnacle stage, the Arai are completely immobile. The Arai stay in this egg-like development state seemingly indefinitely. In order to hatch, they must be in proximity of a polyarch, and fertilized by the beetles after a certain stage of maturity.

The beetles are the "eyes and ears, hands and feet." With only a minimal nervous system of their own, they are essentially the sensory extensions of the immobile polyarchs. They are able to execute simple commands, but apparently have very little in the way of individual sentience.

The Arai polyarchs are the intelligence and consciousness of the species. Although it was obvious that there was intelligence behind the species, it wasn't until Caroline Farley began spending large amounts of time in close proximity that deeper communication began. With a room nearby, Farley was the first to communicate non-verbally and learn much about the species, including some historical information. The Arai species survived in their world while several other sentient species came and went. Among them an ancient species who formed a deeper relationship with the Arai, carving temples and dwellings for them in the rockets. And later, a more recent species that took over much of their homeworld. This latter species was especially adept at mechanical construction, using it mostly to capture and process large flying creatures, using the beetles as bait.

The final species to be discovered were the Villein. The Villein had been communicating with the Arai for many years through "ambassador" seeds, but became part of the larger community very shortly after the Arai.

With a large and imposing frame, and a form of communication based on a complex, multi-voiced, low frequency rumble, the initial introductions were intimidating. After several attempts, Amélie Vidal was able to begin some rudimentary communication and began visiting the Villein in Maray (which she named) on a regular basis. She discovered a complex and amazing society that was able to use their technology in unexpected ways. They had the ability to quickly transform their world using extruded structures based on some form of complex miniature substrate material.

Unlike the other worlds, the Villein sphere is scooped out of a Villein resettlement group that was preparing to set off into space to find a new homeworld. This was their way of life, to put themselves into stasis and scatter themselves through the stars.

As mentioned previously, their appearance is imposing. Standing about nine feet tall, with a distinct reptilian resemblance. They have six limbs - two muscular legs and arms, and a smaller set of arms. They control every aspect of their technology with their vocalizations, but over the years they have created control panels based on their number system that allow other species to easier access elements of their technology.

Community content is available under CC BY-NC-SA 3.0 unless otherwise noted.